Apple Inc. (NASDAQ:AAPL) and Google Inc. (NASDAQ:GOOG) who are considered rivals by many in the tech world are currently under the weather including several other corporations such as, Adobe Systems Inc and Intel Corp. for allegedly violating the Clayton and Sherman Antitrust Acts by joining hands to annihilate competition among their workers. This has apparently deprived their employee’s job mobility and crippling them to work with their current employers without getting satisfactory raise in salary.

The litigation began a couple of years ago (2011) when five engineers filed a lawsuit against Google, Intel Corp, Apple, Pixar and a few other companies for entering into a non-compete agreement not to poach employees between each other to suppress pay and cut down salary expenses. According to the lawsuit, between 2005 – 2007 the above mentioned companies entered into non-competent accords to stop poaching employees by assuring them better wages and welfare. The five software engineers filed a lawsuit once the Dept of Justice unraveled some evidence against the defendants. Following which, the accused companies plead to dismiss the case, which was immediately turned down by Judge Lucy Koh.

The case was mainly built on several e-mail conversations between former Google CEO Eric Schmidt and late Apple Inc. CEO Steve Jobs not to poach talent from each other.

Spokesmen from these companies are not willing to comment on the matter. A Google spokesperson declined to make any comments and respective spokesman of Adobe, Intel and Apple did not respond immediately to the allegation.

One can witness similar patterns in and raise and fall of Google and Apple Shares in the past 5 days because of court ruling to proceed with the lawsuit. Although there was a sudden slump, both of them bounced back pretty strongly. Take a look at the graphs below. 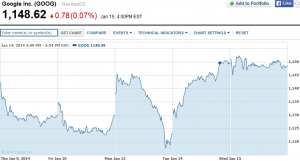 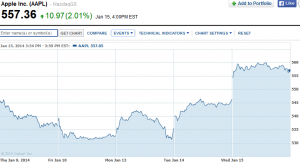 If the defendants were found guilty, there could be a major slack in the stock value of these companies.

The plaintiffs are in a pretty good position to actually win the case and possibly extract billions in damages from the defending tech giants. Judge lucy Koh allowed the workers to sue the companies as a group. Experts speculate that, if proved guilty, the plaintiffs could claim anywhere from $5 to $9 billion in damages. More over Class classification will be a major advantage to the employees. It is also wise on the part of the workers to stand as a group since the companies could easily pressure them to settle for a measly award if they sued their respective employers individually.

With an anti-competitive agreement in place, an employee working for a certain company can’t (or find it really hard to) move to another company for a better salary since they will not hire him/her confiding them to work for their current employer for a small increase in salary or no raise at all or in worst cases a cut in salary. With their resumes declined in all top companies in their industry they will be cornered.

For instance, if someone is working for Apple Inc. and if the anti-competitive agreement is nonexistent, the worker can get a 3 to 5% raise and continue working for Apple or get a job at Google and accept a raise of 20 to 25%, or quit the job. With the anti-competitive agreement in place, the worker won’t have the option to move to Google. He/she could simply settle for a humble raise or quit the job. This is very unfair on the part of the employees and quite apparently violates the Clayton and Sherman antitrust acts.

US Court: Apple Did Not Violate Google Patents

“Google Takes Over from Apple to Become the Leading Innovator”
[advertisement]