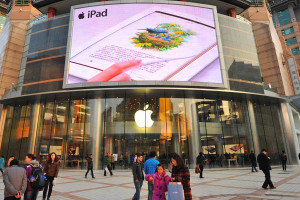 Anytime soon, Apple Inc. (Nasdaq:AAPL) may announce that it has acquired Beats Electronics founded by Jimmy Iovine and renowned rapper Dr Dre. The two companies are rumoured to have reached a deal and all that is remaining is official proclamation. Beats is a high-end headphone maker and music streaming service provider.  It is obvious that Apple is most interested in its music services!

But why would Apple be interested in another company’s music services when it has its own digital music store and a streaming radio service? There may be a lot beneath the carpet, but primarily the potential of music streaming subscription business may be the primary reason.

According to data from the International Federation of the Phonographic Industry, streaming subscriptions soured 51% in 2013, contributing to $1.1 billion in the gross $15 billion spent on music. In contrast, digital downloads dipped 2.1%.

The data also show that streaming services fetches higher revenues that digital music downloads. An average customer spend $25 – $35 annually on music downloads, while such a subscriber spend at least $9 a month.

And since the labels royalties are merely a fraction of a cent per music streamed, the revenues in streaming subscription per user is higher than per user digital sales.

So why Choose Beats?

Beats electronic is renowned for its hardware, though the potential of its music streaming business cannot be overlooked. In its initial weeks of inception in January, beats’ music streaming service signed up over thousand followers a day.

When Apple acquires beats, it will be taking the ownership of the high-margin headphone business together with a music streaming service that has been developed by music industry insiders. In addition, the company will be bringing in top players in the music industry like the legendary music producer Jimmy Iovine. You may well say that Tim Cook’s company may have nipped its competition in the bud.

Prevent Over Dependency on iPhone

“Beats by Dre”, as the young Apple’s acquisition is widely known, will cost the iPhone maker up to $3.2 billion. And though Apple has such a huge amount of money on the coffers, it is now depending on its flagship product – the iPhone – more than ever!

Revenues from iPad are slowing down, the impact of stiff competition fromstreaming Subscription is starting to show signs in its music store and iPod is no longer nascent! Only iPhone is doing well with a double digit revenue growth, and now is contributing about 75% of the company’s total revenues.

While iPhone sales growth and dominance is a good thing, depending on a single product line is dangerous. And with the kind of competition the iPhone is subjected to by Android phone makers, there is need for Apple to reinvent its other businesses if its revenue is to keep growing, and music streaming Subscription may be the answer.

Apple’s music business (iTunes) is slowly losing the love of record labels as the business of digital music downloads is slowly fading. Streaming subscriptions is the current trend in the music industry. iTunes radio, Apple’s 8 month old answer to this development, is also faltering. Therefore, there is every need for the company to re-strategise to compete with early adopters like Spotify and Pandora Media Inc. Conceivably, beats electronics may be it ripostes as it is already in music streaming subscription business and it will hit the ground running!