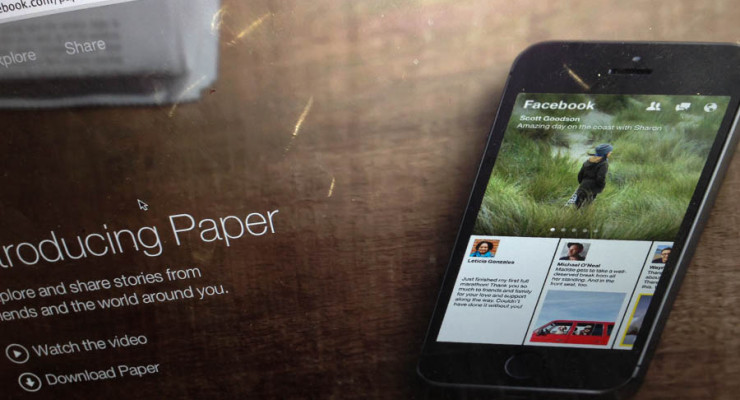 The Facebook (FB) is the only social networking media that has gained such fame and fortune within a decade from its start. Created by Mark Zuckerberg from Harvard University, it is also the only social stock that has seen abundant growth over the years and is now ready with the Paper app, its first product to enhance the mobile.

Many stocks have seen equal parts of ups and lows in the past year. But, it is different when it comes to Facebook which has quite a large ‘highs’ in comparison with its miserly ‘lows’. It doesn’t stop there! The recent quarterly report that showed positive signs triggered a sudden 16% rise in Facebook shares and the Facebook Paper app that just launched this month is expected to further bounce the price soon.

What is Paper app?

Survey shows that more than 60% people are online in Facebook through their android mobile and the apps such as Facebook and Facebook Messenger. Paper is the latest addition to this family of apps that has been added. 53% revenue of Facebook is said to be generated due to advertising via mobile and the shares of Facebook rose over $60 last week and it could have slowly subsided. But the announcement of Paper app seemed to be holding it steadily over the $60 mark and made sure it stayed there. The app is currently said to be launched only in United States.

On an interview with Michael Robinson, in CNBC World, he spoke on Facebook’s current growth and the reasons behind it. According to Robinson, Facebook has around 1 billion users of which 295 million are accessing the social network only via mobile and the Paper app adds to its value. Moreover, companies such as Coca Cola find advertising with Facebook as a medium is more effective than any other form of advertising, earning them a profit of 1 billion.

With one of the largest companies in US (Coca Cola) stating this fact, it’s only normal for the rest of them to follow along the same line. As for the shares of Facebook, Facebook has an average increase of 30% yearly and it doesn’t look like its ready to stop anytime soon. With room for creation of more apps and devices, Facebook shares are further expected to grow 50% in this year.

With the Paper app, Facebook is showing yet again that there is still room for more!